Past and present of Cukrarna

With the opening of Cukrarna Gallery in September 2021, the Slovenian capital has gained a new space that serves both as a venue for exhibiting contemporary art and as a place where thoughts can be explored and contemporary art projects of all kinds – visual, intermedia, performance, sound, music and more – can be created and presented. The presentation of artworks through exhibitions and events is just one part of Cukrarna Gallery’s programme, however: our main aim is to become a new cultural hub. Working with artists and other stakeholders from Slovenia and beyond, and fostering longer-term participation and interaction, our fundamental mission is to fulfil the role of a truly contemporary art institution: to root our exhibition, interpretation and education activities in pro-social, humanistic principles – respect for the other, responsibility towards the environment, and robust social criticism so as to constantly hold a questioning mirror to society – and to do all this in a way that is in keeping with the building’s past.

Cukrarna began life in 1828 as a sugar refinery. Starting with just 22 workers and a single sugar kettle, it grew rapidly over the following decades to become the first proper factory in the region and, by the mid-19th century, the biggest sugar refinery in the Austro-Hungarian empire. Its fate was sealed on 25 August 1858, however, when a devastating fire broke out and put an end to sugar production in Ljubljana, though there were also other factors involved: by that time it had become more profitable to produce sugar from beet rather than from cane, and the owner of the building was deep in debt and could only afford to restore it sufficiently to make it fit for renting out.

Over the following decades the building was lived in by soldiers and factory workers, sometimes both at the same time. Poorer Ljubljanans also moved there in large numbers, especially after the Easter 1895 earthquake.

Those who found a new home in the building also included the writers Dragotin Kette and Josip Murn, while their friends, who included Ivan Cankar, Oton Župančič and other writers, frequently met or even stayed there on occasion. These writers, who will be forever associated with the genre of Slovenian modernism, were Cukrarna’s most famous residents, and in their works they left remarkable testimonies about the building and its occupants. Living conditions were far from adequate, however, and remained sub-standard even in the 20th century, with the result that by the 1980s Cukrarna had come to be regarded as a disgraceful blot on the city.

In 2008 the City of Ljubljana purchased the building and its grounds from its previous owner and from 2018 to 2021 the building was restored and renovated in accordance with plans drawn up by Scapelab before being transferred to the management of the Museum and Galleries of Ljubljana, a public institution.

Due to Cukrarna’s status as a cultural monument, the building work took a conservative approach in which the appearance of the roof and the original outer walls with their 318 windows have been retained. A steel structure was inserted into the shell to support four white-cube gallery spaces. This structure is suspended from the roof and does not come into contact with either the ground or the external walls. A basement floor was added to the building, below the level of the Ljubljanica riverbed.

Though officially protected as an important piece of industrial heritage, Cukrarna has not exactly been known for its architectural beauty in its recent history. Indeed, the main reason it was preserved at all for so long – nearly two centuries – was its status as Ljubljana’s biggest building, at 5679 m2. Now, though, thanks to this major renovation, Cukrarna has finally come into its own as an interesting architectural achievement in its own right.

*The Cukrarna Gallery's exhibition programme is planned two to three years in advance, and most exhibitions are the result of proposals and invitations generated by our in-house curatorial team or collaborations with other institutions. We regret that we are unable to review or process unplanned exhibition proposals from individuals or their representatives at this time.

The Cukrarna lobby is a breathtaking open space, lit by natural light and overlooking two gallery volumes. The floating cube is clad in perforated sheet metal, which, in addition to its aesthetic character, also satisfies functional requirements, as sound insulation is hidden under it. The lobby can accommodate up to 500 standing guests, up to 220 guests at a sitting event or up to 150 guests at a banquet. 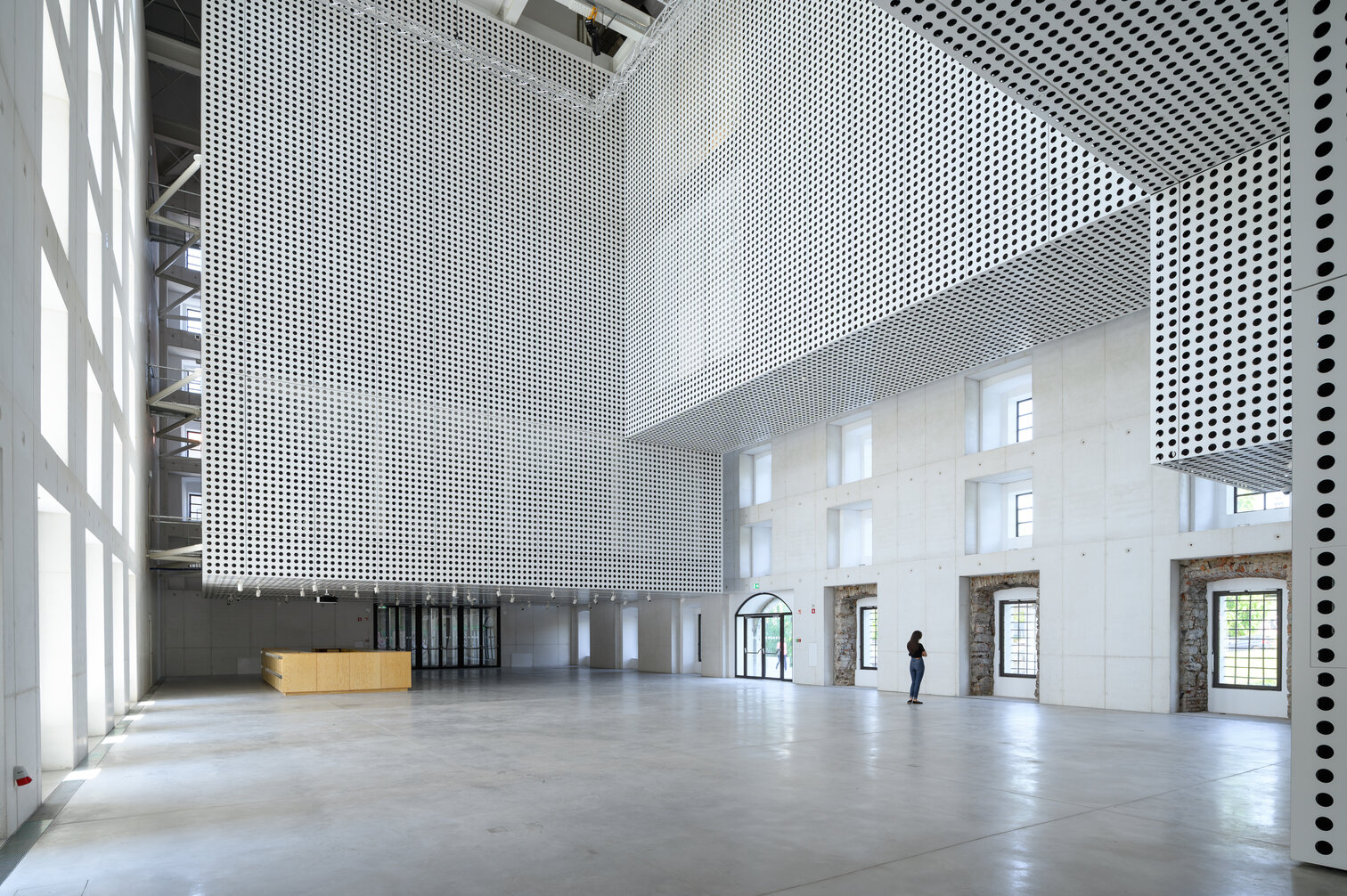 In addition to the lobby, Cukrarna also offers a modern conference room that allows for lectures, conferences, presentations, press conferences, and similar events to be held. It can accommodate up to 70 guests and holds all the latest technological equipment together with an adjacent kitchenette hidden behind removable walls. The conference room layout is adjustable according to the client's preferences. The glass wall on one side offers a view over the Cukrarna's main hall which also allows daylight to enter to the conference room. 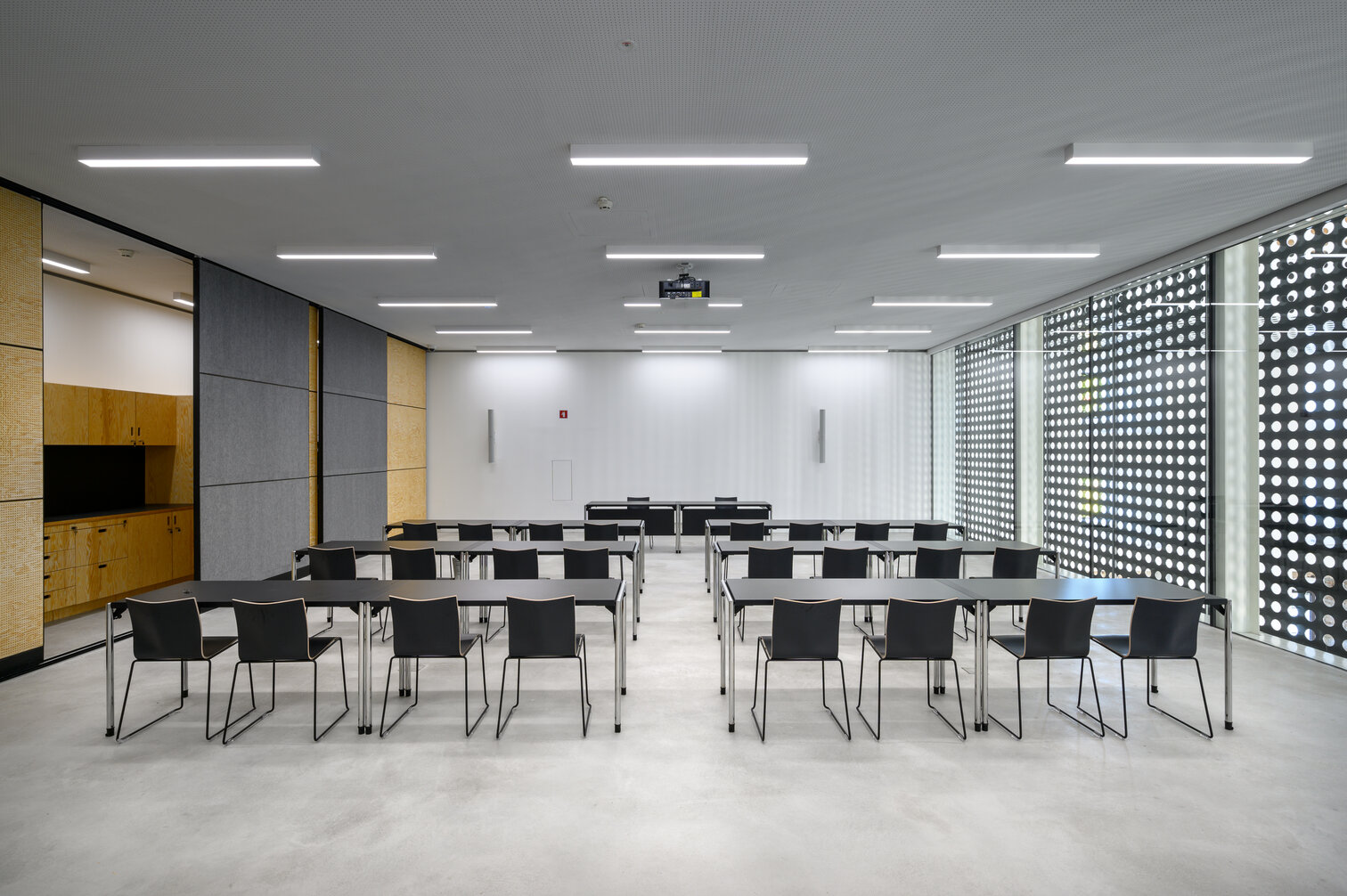