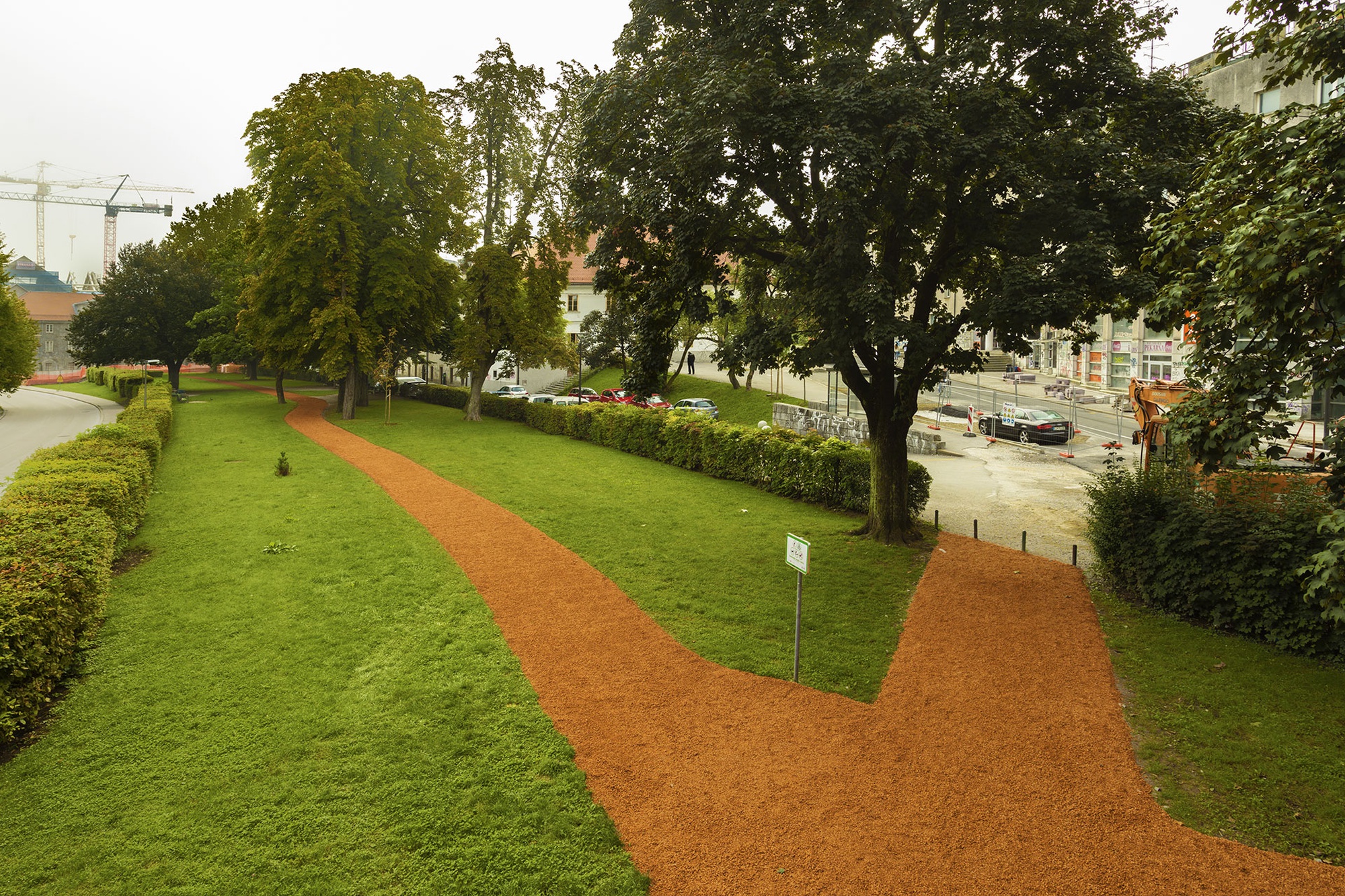 On the Way to Cukrarna Gallery

Projects in the run-up to its opening

The pre-opening programme of Cukrarna Gallery includes four projects carried out during the renovation of the building. Seeking a balance between its past, renewed image, micro-location, culture and contemporary art, they propose certain considerations as offshoots and subject points for its repositioning in the space. It is precisely with thoughts of the past, the architectural and natural features of the surroundings, but also with an eye to the future and the role that young people will play in it, that we have invited artists from the local area to participate. They are familiar with the history of Cukrarna, if nothing else from their younger days and their school lessons on Slovenian modernism.

One of the first projects was the spatial intervention of Matej Andraž Vogrinčič, who paved the path through the nearby park on Ambrožev trg with the crushed material of Cukrarna's roofing from the first phase of the renovation. It is worth noting that his work has been preserved to this day and still allows us to walk on the "former roof" to its renovated building. The second project was carried out by Polonca Lovšin in cooperation with the high school pupils from the surrounding educational establishments and was intended not only to demonstrate the necessity and beauty of cooperation but also to promote discussion of nature conservation issues with the help of young people.

Developing empathy for the environment and the creatures living in it is also one of the main content guidelines of the work of Robertina Šebjanič, whose project focused on the Ljubljanica, which flows along Cukrarna, and the role of Plečnik's locks on the river. Shortly before the staff moved into the offices of the renovated building, the last in the series of projects in the pre-opening programme was carried out, an audio drive-through of the TGH-49 car park, with which the Nonument Group drew attention to the specific structure of the 1960s building. With all the aforementioned projects, we have tried to map the immediate surroundings of Cukrarna or those architectural gems whose presence enriches the cultural landscape of this district, which remains run-down to this day.

As a sophisticated student of the history of space, Vogrinčič has reflected on the park’s past through the material remains of the Cukrarna building, as well as through personal and collective memories. This has culminated in the creation of On the Way, a multi-layered representation of the harmony between past, present and future. The artist approached the park on Ambrožev trg as a living organism whose laws, nature and very being mean its appearance must always be in flux. He therefore rejected dramatic interventions, opting instead for minimal but technically challenging alterations. These included the transformation of the park’s central path leading from the junction to the disused factory. In september 2019, the artist overlaid the path with crushed roof tiles from the Cukrarna construction site, sticking closely to the original shape and route of the path.

The space through which visitors can walk now creates an explicit link between the park and Cukrarna. By focusing on the central path through the park, the artist has also turned it into a metaphor for the way cultural activities are expanding out of the city centre and towards the new contemporary art venue on the Ljubljanica. 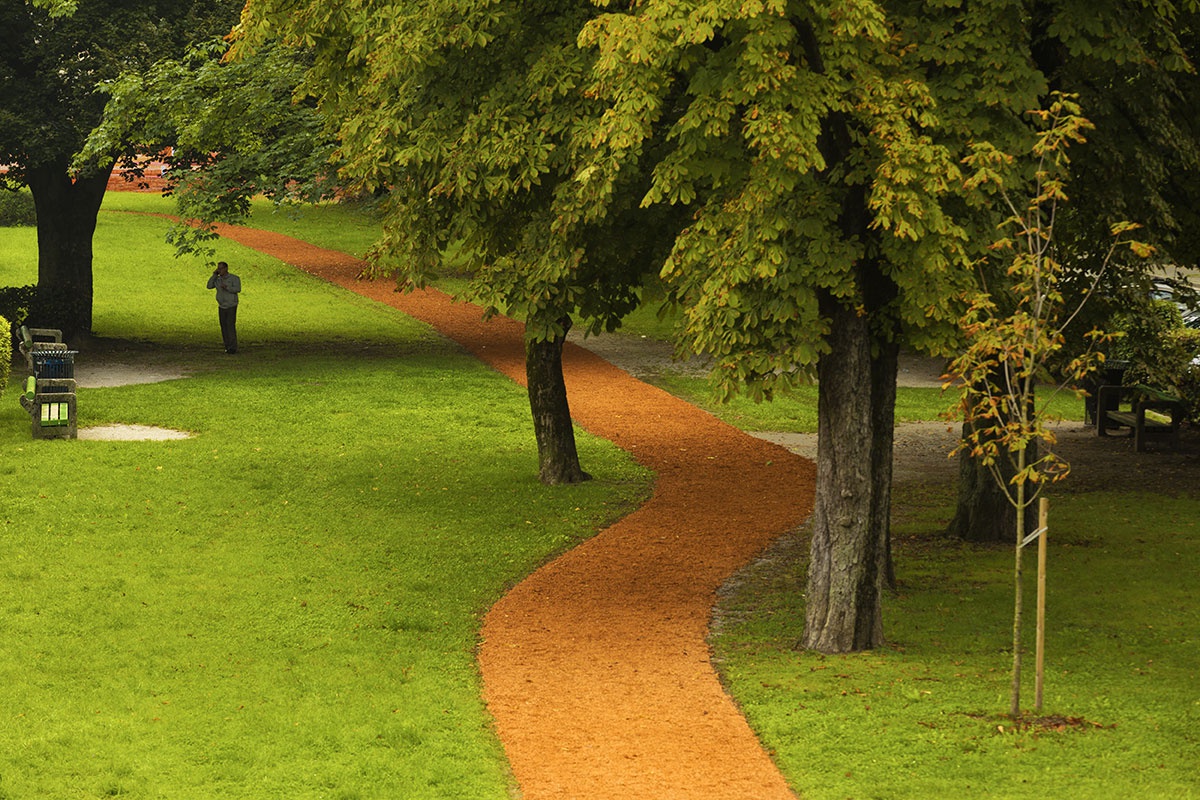 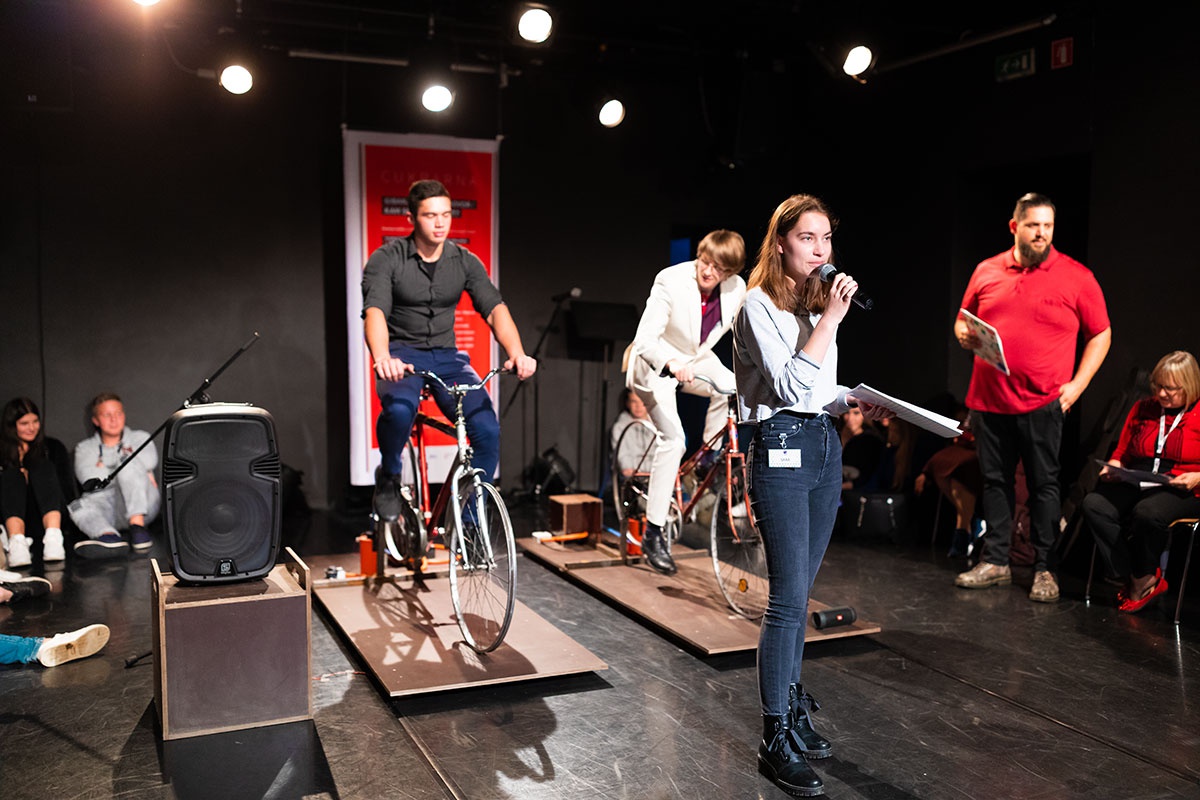 Movement for Public Speech / Where is this World Going?

This event, the second in a series of projects leading up to the opening of Cukrarna Gallery, was held at the Ivan Cankar student hostel on 10 October 2019. Conceived by the architect and sculptor Polonca Lovšin, the key element of this interactive kinetic project was movement – kinesis in ancient Greek: the microphone and sound system were entirely powered by green energy generated by people pedalling on static bicycles. This temporary public sculpture, designed to foster communication with local schools and colleges, addressed topics of particular importance to young people, such as social interdependence and responsibility. It consisted of a podium, on which invited speakers gave talks, sang, played music and danced. This transformed the podium into a space where ideas could be publicly expressed – but for ideas to be expressed publicly, there must also be active listeners. The microphones depended on electricity generated by attendees pedalling static bicycles mounted on a platform beneath the podium. This created an interdependence between the participants: without that vital connection between the speakers and the listeners, the ideas expressed would not have been conveyed.

Robertina Šebjanič’s three-part work, Co_sonic 1884 km2, was the third in a series of art projects in the run-up to the opening of Cukrarna Gallery. It was put on display in March 2021 in the park on Ambrožev trg, close to Plečnik’s sluice gate, where the river can be heard flowing by. Šebjanič’s art explores aquatic ecosystems, the environment and environmental protection. This project, consisting of an audio-visual installation, photographs and a video essay, focuses on the basin of the Ljubljanica River, as hinted at by the 1884 km2 in its title. The artist takes as her starting point the fact that rivers are dynamic bodies of water, constantly changing and shaping their beds. These changes occur in a spatio-temporal dimension more easily perceived by the smaller creatures living in that denser time and space, and so this audio-visual project departs from an anthropocentric view of the world and shows instead the way a body of water may be perceived by its inhabitants, be that trout, grayling, huchen, olms or frogs. The river has cut a route through the underground karst and therefore disappears from view in some places, since we are restricted to the surface; it is therefore generally regarded as a system of seven rivers, each with a different name. But it is also possible to view the basin of the Ljubljanica River, along with its karst upper reaches, as a whole made up of the river and a number of individual lakes. This approach is made possible by the fact that water flows, thereby creating a habitat for the creatures that migrate along its course. From the perspective of the Other, this is all the same watercourse.

With its sounds and images of life forms both above and below the water, this project not only teaches us about the inhabitants of these environments but also, even more importantly, alerts us to the many ways in which humans affect aquatic environments, be that through riverbed interventions, navigation, regulations relating to biodiversity, or exploitation of their natural resources. The artist presents this human influence in the form of a dynamic set of disturbances on the periphery of idyllic natural scenes, thereby highlighting the extreme instability of the aquatic ecosystem, where the legitimate human right to exploit is in stark conflict with the right of the river to exist and the right of its inhabitants to an unpolluted water. In this way, Co_sonic 1884 km2 presents us with a snapshot of the present moment, when rivers around the world are losing their vitality as a result of human activity. It encourages us to think about interdependence and to create strategies for developing empathy with non-human life forms and with the environment that need to be protected. 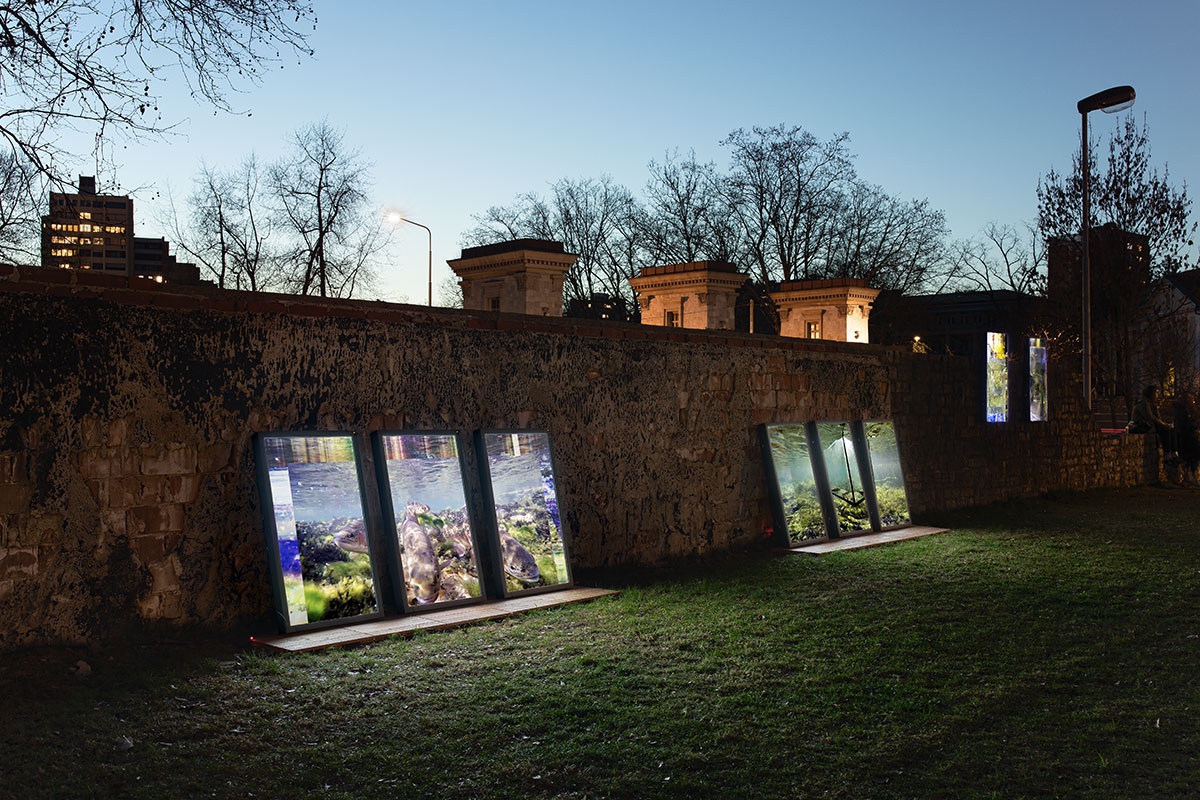 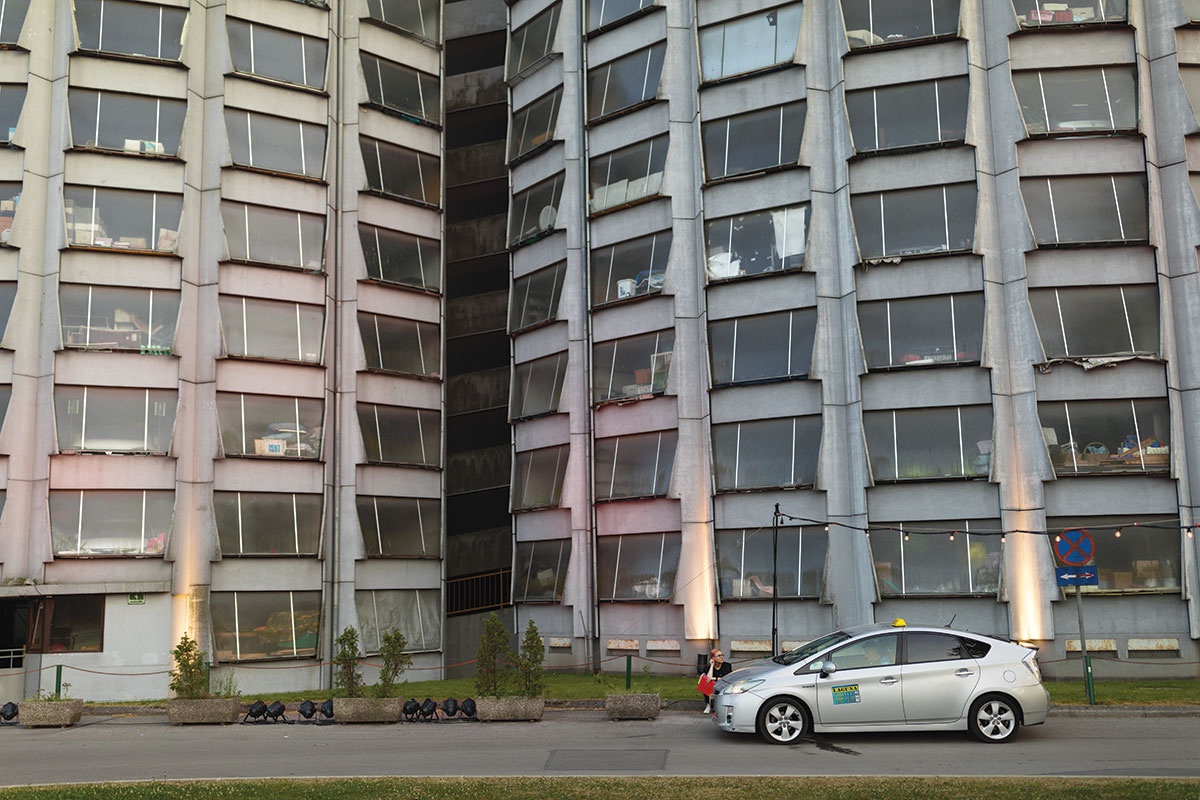 Nothing Can Happen Here

In June 2021, the TGH-48 car park on Ambrožev trg, widely regarded as being no good for anything, became the venue for the last of the projects leading up to the opening of Cukrarna, an audio drive-through called Nothing Can Happen Here, created by the Nonument Group, a research and art collective made up of Neja Tomšič, Martin Bricelj Baraga, Miloš Kosec and Nika Grabar.

"Sitting in a car, we climb, spiralling upwards in the form of a figure-of-eight. We hear the voice of the narrator, whispering, describing the loops. His narrative is interspersed with the voices of users, former owners, the architects and the caretaker. Nostalgia and admiration for the architecture combine into an endless loop, further heightened by the drive to the top of the ten floors and back down again: all sense of time is lost. We move from the past to the present, all the time admiring the architecture, the incredible balance and harmony of the floors, the rhythmic effect of the garages and their doors, the lift and the staircase. The doors of the garages present new stories, new deviations from reality. They are transparent, metallic, covered in newspapers, posters and rubbish, nailed or bound together, broken, open, new, neat, clean, of every possible colour and pattern, and yet symmetrical and regular. I forget for a moment that I am in a car park, in my mind I am in a gallery: the garage doors are transformed into canvases, everything from avant-garde collages to abstract compositions, forming a catalogue of sorts of the history of painting. The timelessness of the soundtrack that accompanies the whisperer, the stories told by the interviewees, the playfulness of the space and the endlessness of the figures-of-eight all emphasise and open up the possible ambiguities and mental pirouettes suggested by the project title, for it is certain that nothing can change here." Alenka Gregorič